Roses are Red and so is my Dress :) 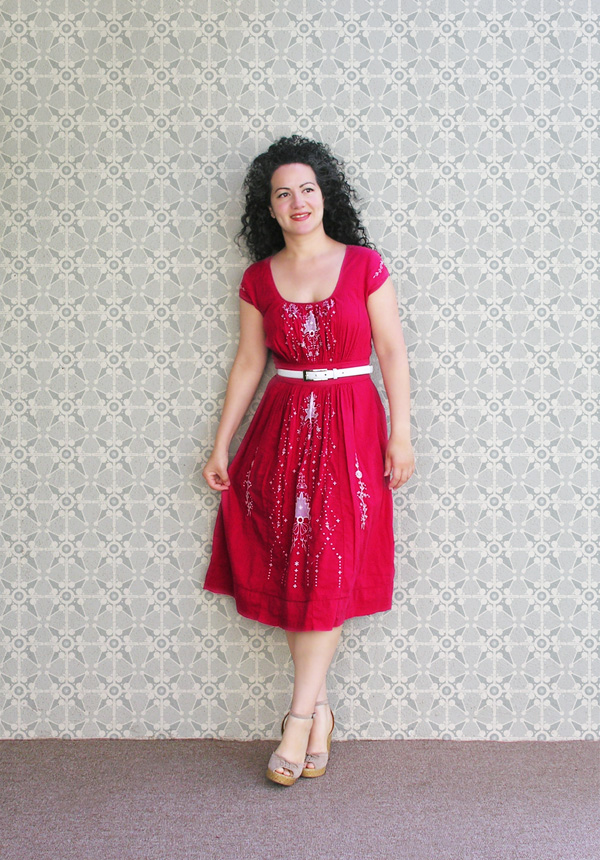 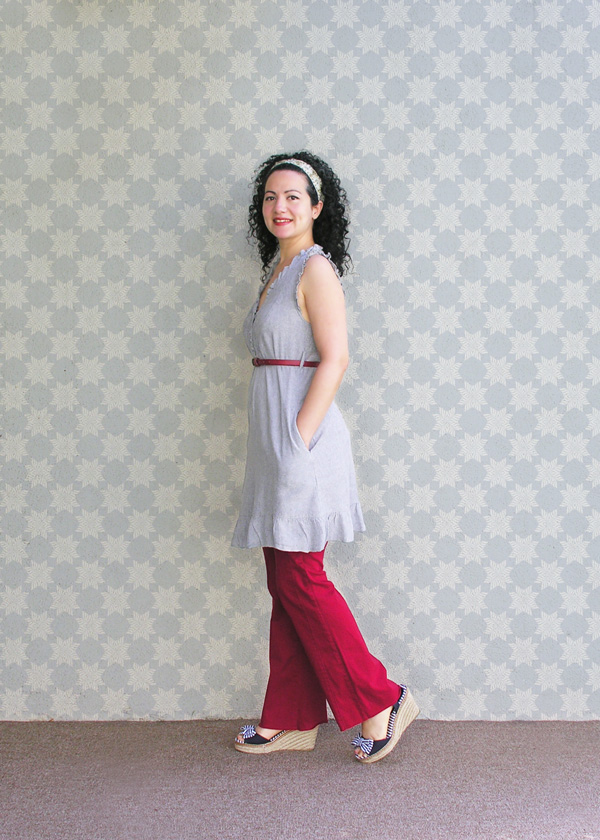 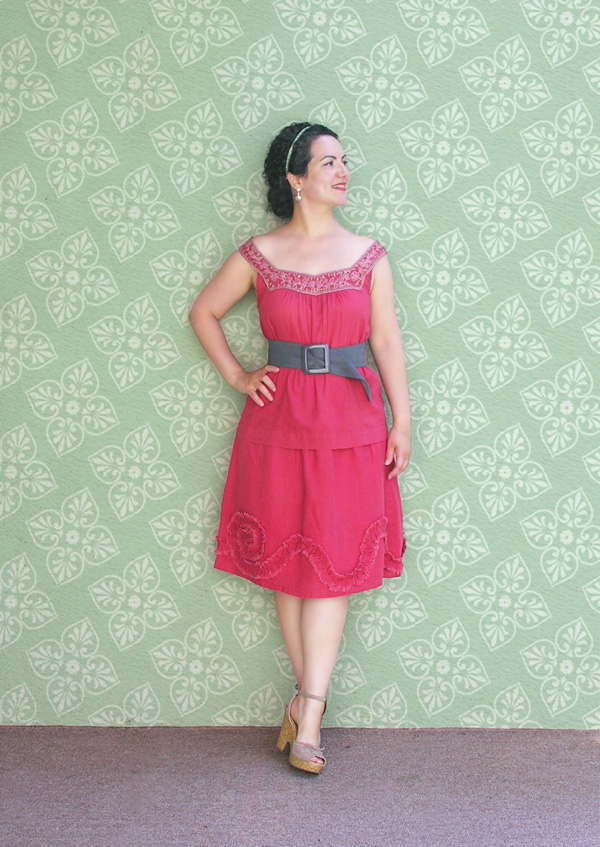 Tonight we're having dinner with friends here in NYC. I will be wearing this oufit. Our visits to this city are always so much fun! (This photo is from when I was still in lA)

Linen Skirt: Sewn by me This look was inspired by him :)

(All the ingredients came from Anthropologie) 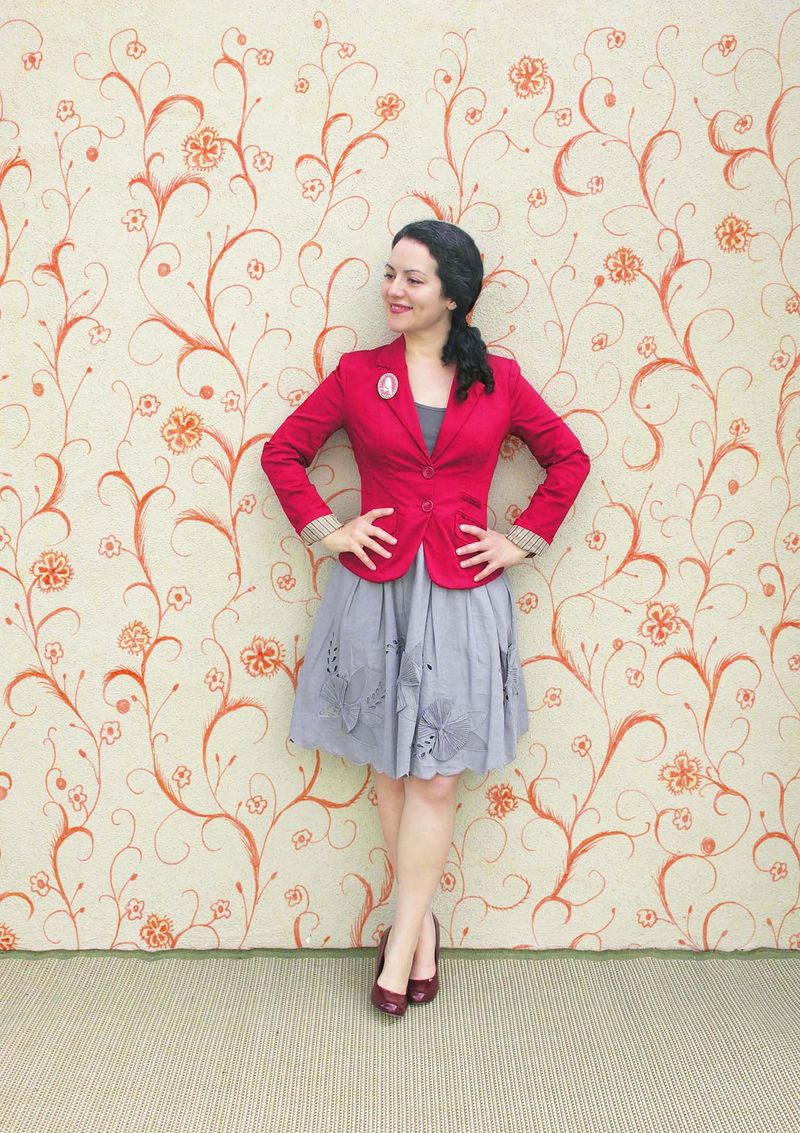 This is the first red jacket that I ever had. I have been dreaming about it and I am so happy that I found it. I love the color red with gray and also with white. Red gives me lots of energy, it makes me feel very alive :)

Cameo: made by myself

Background: drawn by myself

The Color of Mystery 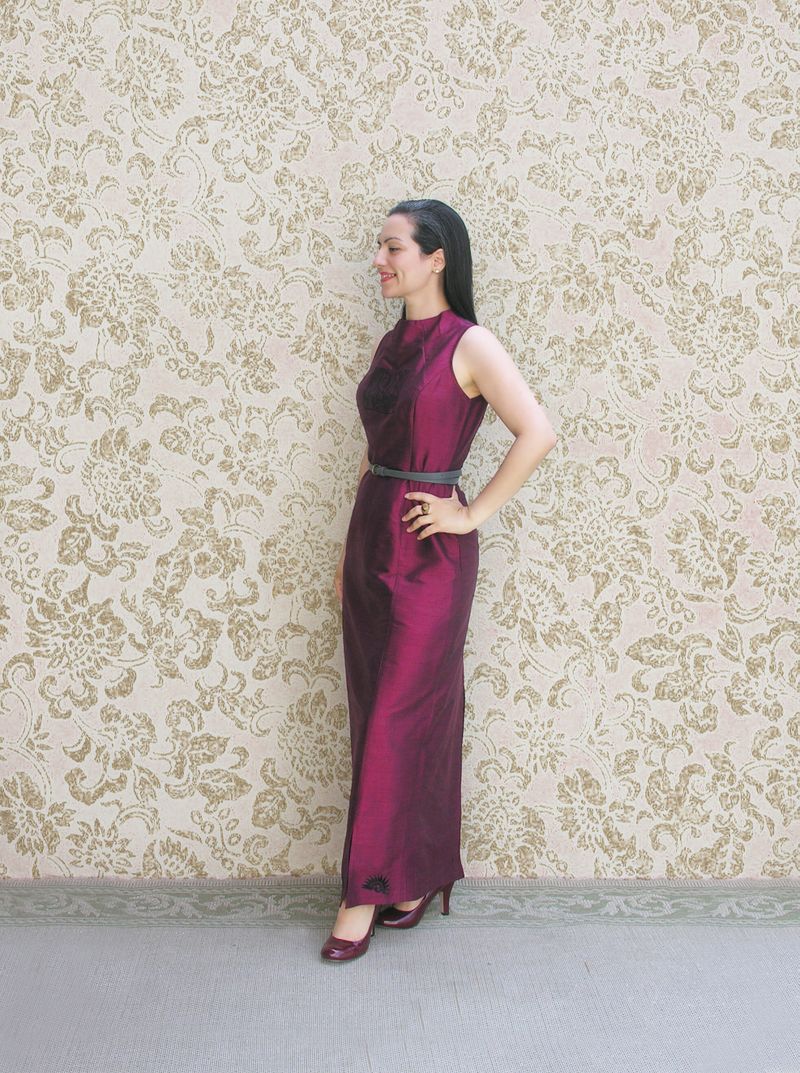 This is one of the most mysterious colors that I have ever seen. I found this beautiful handmade dress in Vietnam many years ago, just after Bill and I meet. We were at the very beginning of our relationship. Bill and I knew that we had a lot in common but we had no idea about what was going to happen after our Vietnam time. Back then it was all a mystery to us. And here we're now, married and happy. I want Bill to have a very long life, he is 12 years older than me, which means that by the time I am 90 he is going to be 102 :) It is impossible to know how many years we're going to live but all I can say is that I am forever grateful for having this man in my life.

(See what a color can make you think about :) I love roses so much! They are little miracles from nature. Many of the vintage brooches in my collection are roses. But they also have so many different meanings :)

“Love is much like a wild rose, beautiful and calm, but willing to draw blood in its defense.” (Mark Overby)

“Life is a rose; beware of the thorns.” (unknown)

“Man is harder than iron, stronger than stone and more fragile than a rose.” (Turkish proverb)

“He who wants a rose must respect the thorn.” (Persian proverb)

“Do not watch the petals fall from the rose with sadness, know that, like life, things sometimes must fade, before they can bloom again.” (unknown) 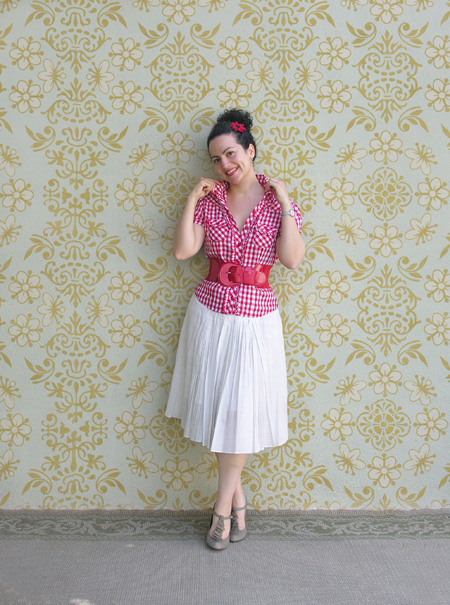 Here are the elements that should go with this outfit: a basket with little sandwiches and drinks, some embroidered napkins and a nice quilt to display on the grass. Imagine all these elements together. Next: take shoes off, relax and have a nice time with the family :) 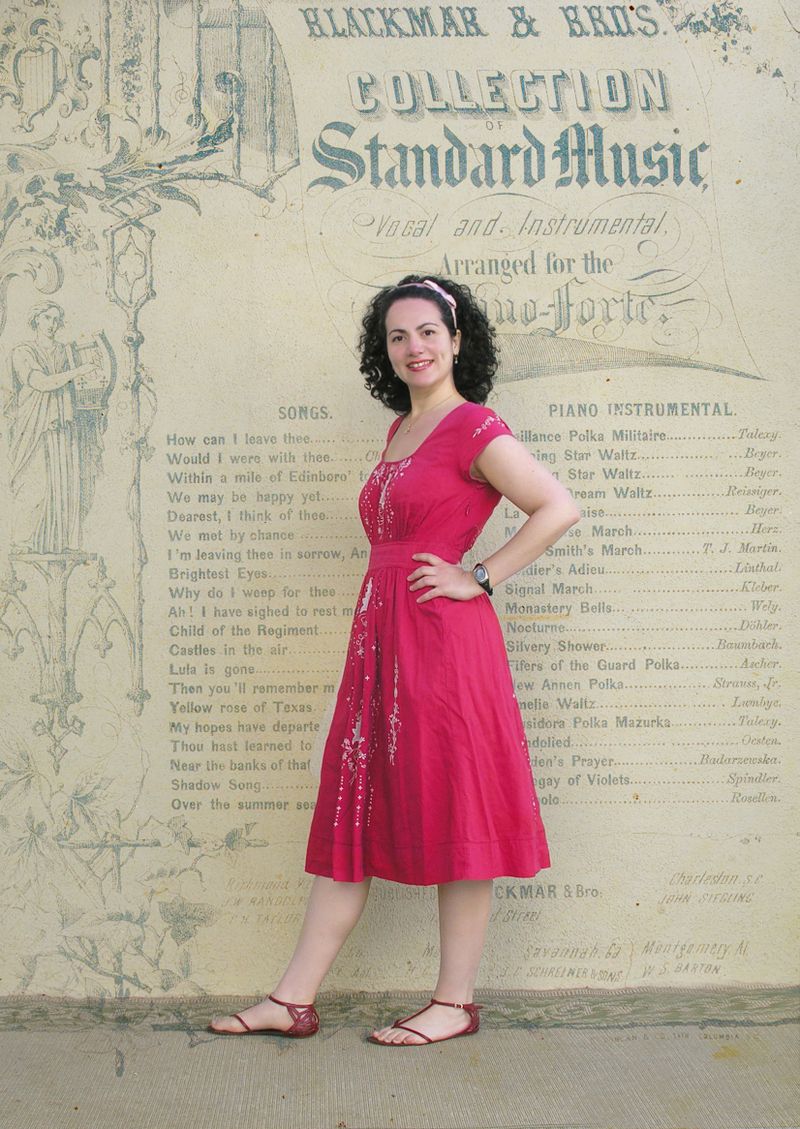 Here I am ending this week in Red :)  Today we're driving up to the mountains again for a relaxing weekend with the kids. I can't wait!

I wish you a very peaceful weekend too my friend!

Red is hot. It's a strong color that conjures up a range of seemingly conflicting emotions from passionate love to violence and warfare. Red is Cupid and the Devil. 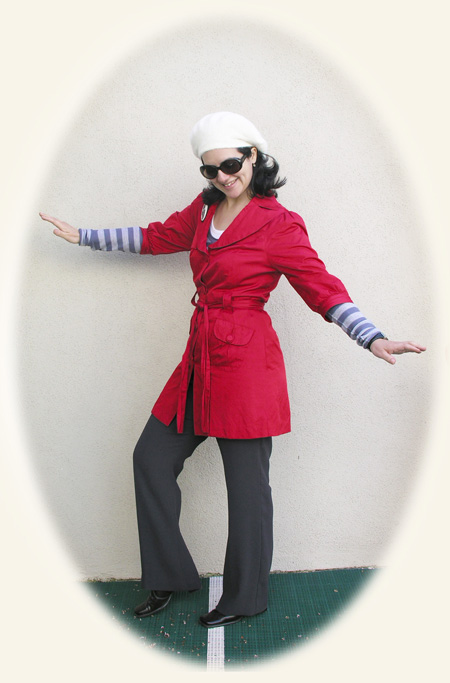 A stimulant, red is the hottest of the warm colors. Studies show that red can have a physical effect, increasing the rate of respiration and raising blood pressure.

The expression seeing red indicates anger and may stem not only from the stimulus of the color but from the natural flush (redness) of the cheeks, a physical reaction to anger, increased blood pressure, or physical exertion. 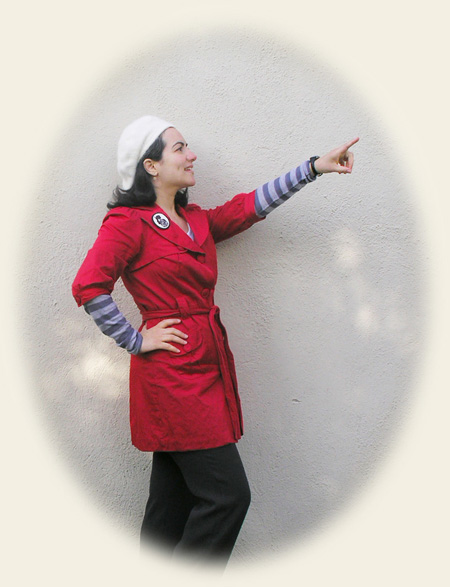 Use the color red to grab attention and to get people to take action. Use red when you don't want to sink into the background. Use red to suggest speed combined with confidence and perhaps even a dash of danger. 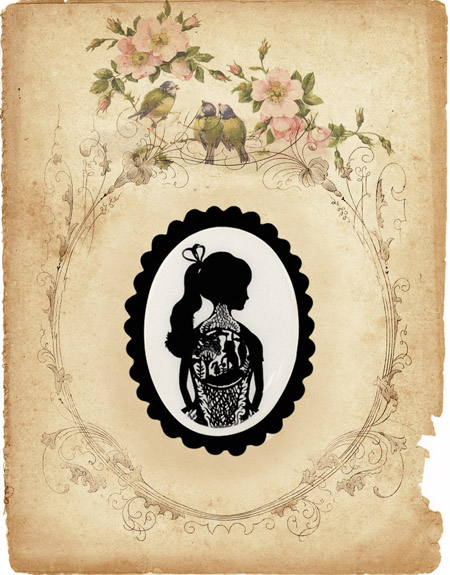 Red makes me remember of my first kiss. Not because it was romantic but because I almost end up going to the hospital. Let me tell you the story:

When I was 14 I had my first "official" boyfriend, that means that my Mom knew him. He was older, about 20, and the most handsome boy on the block. One night my neighbor Madelaine (she was 15) and her friend, that we called "la china", put together a whole plan for Julio to kiss me for the first time. I had no idea about what they were doing. They asked me to come to Madelaine's house at night, her house was located more or less behind my house and you couldn't see anything around there at night (it was Cuba where light bulbs were a luxury for indoors only)  So I started walking to Madelaine's house but in less than a second I found myself almost flying in the air and landing on the ground, a very dramatic fall, it was crazy! What happened was that something was blocking my way , like a wire, and I couldn't see it. My boyfriend came out from nowhere, he quickly helped me get up and then he started kissing me. WHAT? I was so mad, my knees were bleeding and Julio was trying to kiss me, I pushed him back and I said: what are you doing? I am in pain, my knees are bleeding!

It turned out that Madelaine and "la china" had place the wire on my way on purpose so I could "accidentally" fall down and Julio, in a romantic gesture, was going to come out from the dark to help me get up and then we were going to kiss each other and be happy ever after. I can only say that if you are planning something like that for a friend, don't forget to place a heavy quilt or something like that underneath the wire to prevent bleeding knees. That night was crazy but now I remember everything and it makes me laugh so much! I am 100% sure that Madelaine and "la china" would have made terrible film producers but they were the most fun friends ever!

And how about your first kiss? I would love to hear from you about this :)  Nobody can forget the first kiss. 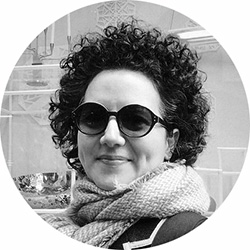